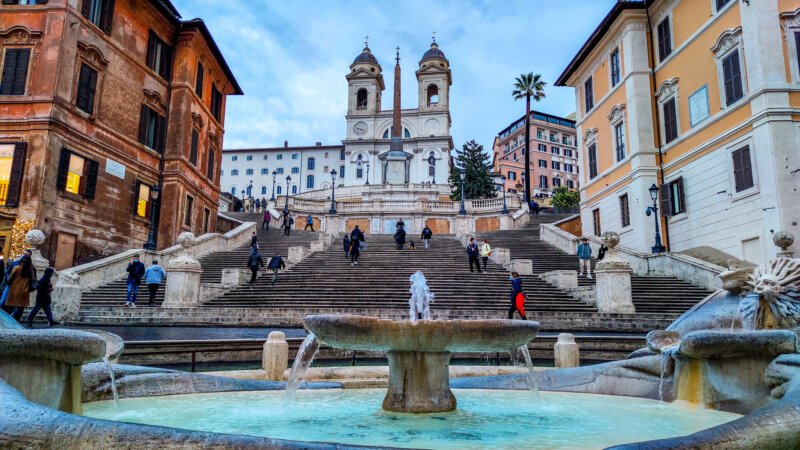 Elegant and scenic, the Piazza di Spagna provides a welcome point of encounter at the center of Rome. Its peculiar fascination is derived from a combination of color, the 18th-century buildings surrounding it, the flowers that adorn the Spanish Steps, and the animated and cosmopolitan atmosphere that pervades it. It is the only place where three distinct elements of urban décor, a fountain, a flight of steps, and a church, have become a monument in its own right, as well as a scenic wonder. This piazza has been a destination of foreigners to Rome for centuries, where most came as pilgrims and arrived in the north part of the city before finding lodgings. From this piazza fan out such prestigious streets as the Via Margutta, famous for the many painters who live and display their works there; the Via del Babuino, with its many antique shops; the Via Condotti, with its sophisticated boutiques and celebrated Caffé Greco, dating back to the 18th century, a historical place of rendezvous of great Italian and foreign artists; the Via Borgognona, which is also flanked fashionable boutiques and couturiers; and the lively Via Fratina.

Formed from two sharp triangles, the piazza is such a strange shape that it’s hard to call it a “square.” Until a few centuries ago, only the southern half was Piazza di Spagna (after the Spanish embassy to the Holy See). The northern half was called Piazza di Francia (after the French embassy).

The church of the Santissima Trinità dei Monti At the end of the 15th century, only a small chapel existed on the hill. It was built near the monastery founded by St. Francis di Paola in 1493. St. Francis was a hermit from Calabria and was sent by the Pope to Paris to minister to King Louis XI, who was seriously ill. At the king’s death, his son Charles VIII became his patron and bought him the vast vineyard in Rome, where he founded a monastery dedicated to the Minimi Friars. In 1495, French King Louis XII commissioned the erection of a new church, replacing the chapel. Construction started in 1502 and dragged on for decades. It was only consecrated in 1585 by Pope Sixtus V, who considered it the cornerstone for his ambitious urban development plans for the city. Its elevated position and its twin bell-towers’ strong upward thrust make it one of the most suggestive landmarks in Rome. The church contains many paintings and many private chapels acquired by patrician families like the Orsini, the Altoviti, and others. After the Spanish Embassy had established itself in a magnificent palace on the square at the end of the XVI century, a wealthy prelate had another grand residence built there, which he subsequently donated (in 1612) to the influential Jesuit Congregation of the Propaganda Fide.

The gothic church with a renaissance façade has two bell-towers. Inside, several paintings decorate the different chapels. Among them are two works by Daniele da Volterra, a pupil of Michelangelo. Its location on top of the Spanish Steps and the rosy color make the Trinità dei Monti a well-known landmark in Rome.

This French connection tells part of the story of the piazza, for during the time of Louis XIV of France, his advisor, Cardinal Mazarin, proposed a plan to build a monumental staircase up to the church of Trinita’ de’ Monti which featured an equestrian statue of the French king. The plan was obviously not popular with the papacy, and it was shelved for a hundred years until finally built without the statue.

“The Spanish Stairs were built to unite Via del Babuino (the easternmost of the three main arteries radiating into the city from the Piazza del Popolo) with Via Felice, the first great street planned by Sixtus V (1585). Their junction is crossed at an approximately right angle by Via Condotti, which defines St. Peter’s and the Vatican’s direction. Several projects were done between 1717 and 1720, Alessandro Specchi, whose ideas were later assimilated by the chosen architect of the Stairs, Francesco de Sanctis. The prosperous and varied solution ultimately employed by De Sanctis (1723-26) is based on a simple doubling in the depth of the central theme from the Ripetta: a protruding volume flanked by convex stairs and a straight flight in front. The upper unit presents the theme in its basic form; the lower constitutes an articulate and lively variation.”

The Spanish Steps are a majestic series of three flights of steps that lead up to the impressive double-bell towered church (before which stands an obelisk). This complex can best be seen from far down Via dei Condotti. In early summer, they are sometimes completely covered with flowers of many colors making a delightful sight. In summer, the myriad of tourists who come here often sit on the steps to soak in the atmosphere and watch the street sellers and the caricature artists who work at the foot of the steps plying their skills. An Italian intriguing fountain sits not far from the bottom of the steps that always has people around it puzzling over its peculiarities. This is la Fontana della Barcaccia which is set very low, almost at street level, to function with the low water pressure that arrives there. By why a fountain in the shape of a small boat? In 1588 Rome suffered one of its infrequent inundations when the Tevere could no longer hold all the water that washed down the river. It was devastating, and many people lost their homes. When the waters subsided, there was left a small flat-bottomed boat in the mud (which had been used to rescue people and move possessions), a symbol of the efforts to survive the floods. It was this that inspired Pietro Bernini and his son Gian Lorenzo to construct this wonderful fountain.

The fountain, commissioned by Pope Urban VIII (Barberini), was built between 1627 and 1629. In this period, while the French and the Spaniards, as lords of Trinità dei Monti vied with each other for supremacy in the hope of gaining more territorial prestige, interest in this square, which had the fame of being a privileged enclave, began to attract numerous foreigners to Rome. Many taverns, inns, and cafes were opened, and between the seventeenth and nineteenth centuries, business and commercial activities began to concentrate there as well. Towards the middle of the sixteenth century, the French began to plan a flight of steps to connect the square to their church on the hill above. Still, it was only in 1723 that Pope Innocent XIII decided to name Francesco de Sanctis, whom the French approved of, as the famous steps’ executor. This beautiful stairway gave the square its graceful and elegant seventeenth-century touch that was the reason for its popularity during the Romantic and the Art Nouveau periods. These steps have a powerful scenic, almost theatrical effect on the square, making them an ideal stage for the annual fashion parade “Donna sotto le Stelle” when the most important Italian and international stylists present their collections. In the southern part of the piazza, there is an obelisk erected in 1856 to commemorate the Catholic dogma of the Immaculate Conception proclaimed by Pius IX. The column, found under a monastery in 1777, is topped by a statue of the Virgin Mary and rests on a base that features statues of the prophets Moses, David, Isaiah, and Ezekiel. The pope comes here every year on December 8th to celebrate the Immaculate Conception. The obelisk just in front of the church was originally located in the Gardens of Sallust. In 1788 it was moved to its current location at the request of Pope Pius VI. The hieroglyphs were copied from the obelisk on the Piazza del Popolo.

The column stands in front of the Palazzo di Propaganda Fide which features a facade that faces the piazza by Bernini and, down the street to the right, another marvelous facade designed (1662) by Francesco Borromini that displays those elements consistently employed by Borromini to maintain the fluidity of his buildings: where one is used to straight walls he uses gentle curves to break the line, windows of varying shapes, pilasters to break up the length. This is a narrow street, and walking along it will bring out the beauty of Borromini’s work.

Also, at this end of the piazza is a very discretely decorated MacDonald’s, so discrete that if it weren’t for the droves of people who go there, you would never notice this little corner of America! When the concession first started up, there was quite a reaction from certain Roman community elements, who demonstrated outside giving away free plates of pasta. It’s now an integral part of the scene, as are numerous other concessions. 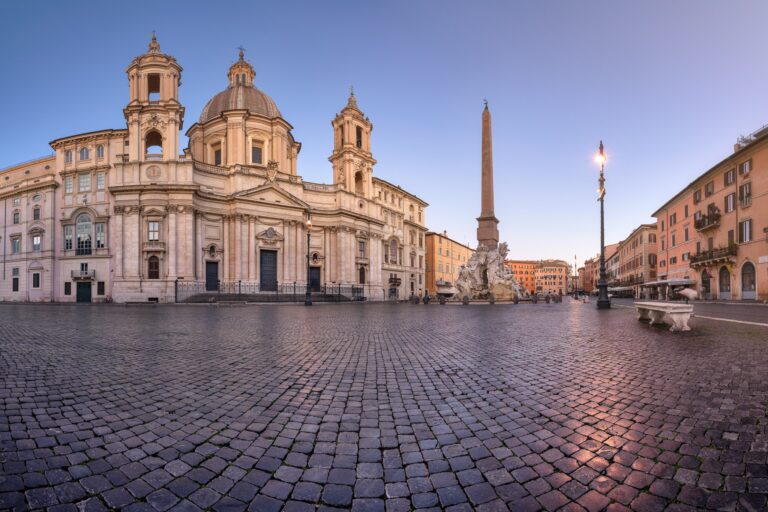