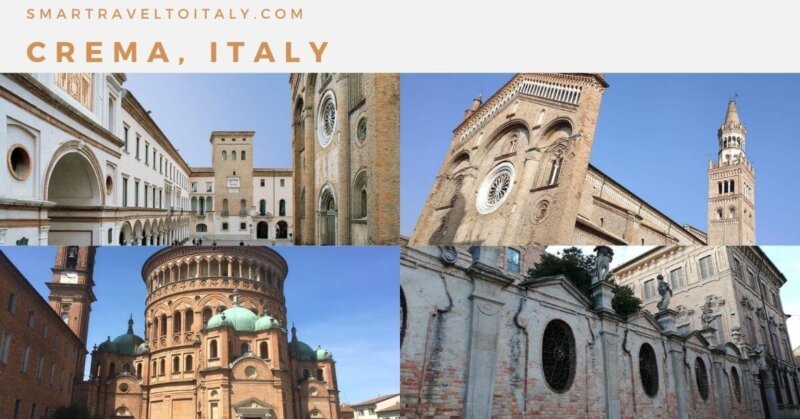 Crema is a beautiful town in the Po Valley, where you can still find rich testimonies of history and medieval art, admirable in its beautiful old town. Ordered and quiet, it is a perfect destination for those who want a vacation with a slow pace, with its charming location around the river Serio and its elegant and peaceful atmosphere.

Crema has also been a protagonist in the cinema: the city, in fact, was chosen as the location for the film Call me by your name by Luca Guadagnino, winner of an Oscar and candidate for a total of four statuettes.

One of the most iconic places in Crema is undoubtedly the sanctuary of Santa Maria della Croce, located about one kilometer from the train station. Its origins are linked to a miracle of the Madonna with gruesome implications.
The sanctuary was built in the place where, according to the legend, Caterina degli Uberti, a member of a wealthy family of Crema, died at the hands of her husband, a bandit from Bergamo. After the apparition of the Madonna to whom she had turned in prayer, the woman managed to survive long enough to receive the sacraments and die in her city. A cross was placed on the apparition site, and, later, the Sanctuary was built.

Porta Serio was part of the ancient city walls, rebuilt for the first time at the end of the 12th century. The current appearance of this structure, however, is due to several renovations over the centuries. There is news of one that took place in the second half of the seventeenth century. During the nineteenth century were instead demolished walls, when Crema was declared an open city, but Porta Serio and Porta Ombriano were kept standing. However, their appearance was decadent, so it was necessary to remake them in neoclassical style.

Porta Serio presents on the outside two high columns in Ionic order that define the great archway through which one enters the city. Above it, there is a large aedicule with a triangular tympanum. The entire upper part of Porta Serio is studded with statues. Externally they represent Italy and France, while those placed towards the inside, in Carrara marble, represent warriors in military clothing.

After passing through Porta Serio, we find ourselves in Piazza Garibaldi, the first square in the historic center of Crema that we pass on our way. Its aspect is clean and modern, thanks to a substantial renovation made in recent years. On a large base in stone and cement stands the statue of Giuseppe Garibaldi in a small traffic circle. In the background, instead, a series of houses with pastel-colored façades guide the eye towards via Giuseppe Mazzini, one of Cremasque’s shopping streets.

The church of San Benedetto also overlooks Piazza Garibaldi and, with the low buildings that surround it, creates a view that seems to be stopped in time.

The church of San Benedetto is a great representative of the baroque style in the city and was built in the seventeenth century on a project by Francesco Maria Richini. There was already another church connected to a monastery in the same place, dating back to the end of the eleventh century. Entering the church of San Benedetto, it is still possible to see some traces of this first construction: parts of the cloister are visible in the iemal chapel and parts of frescoes along the left wall of the church.

Our visit among the things to see in Crema continues, and we pass by the Civic Museum of Crema. What also strikes us is its location, the ancient convent of Sant’Agostino, built in the first half of the 15th century for Augustinian friars.
This was a confraternity that was very dedicated to culture, so much so that there was also a well-stocked library here in ancient times.

The structure of the ex-convent of Sant’Agostino in which the civic museum of Crema and the Cremasque is located had two cloisters on which rose the various rooms among which there is the most particular one, that is the refectory today known as Pietro da Cemmo’s room, endowed with rich frescos of the beginning of the 16th century rediscovered in 1953 under a thick layer of plaster. The phytomorphic scenes on the ceiling and the sides of the refectory are accompanied by the Crucifixion and the Last Supper on the short sides of the room.

After the Napoleonic repression, the convent was transformed into a barracks that first housed French soldiers, then Hapsburg soldiers, and finally soldiers of the Kingdom of Italy, who remained here until 1945. During these centuries, several changes were made to the structure, including, in 1830, the total demolition of the church attached to the convent. At the end of World War II, this space was used to give hospitality to the poor, and from 1959 onwards, numerous restorations were carried out that led it to become a cultural center, with a museum and library. In 1959 the civic museum of Crema and the Cremasque was officially born, and it opened its doors in 1963.

The next palace we come across is the Terni Bondenti palace that dates back to the late seventeenth century. It was Count Nicolò Maria Bondenti who had it built to show his power after he obtained the title of count in 1682.

Palazzo Terni Bondenti took the place of other much more modest palaces and a house belonging to the counts Premoli. In fact, Count Bondenti died before the palace was finished, and so in 1737, the works were officially interrupted and then resumed by the subsequent noble families who acquired the property of the palace.

The next stop to see in Crema is the church of San Giacomo. It is a narrow building behind which rises the bell tower with a spire on top. The church was originally built in the thirteenth century but immediately underwent several phases of reconstruction. The current appearance derives from the Baroque revision made in the eighteenth century.

The facade is marked by four pilasters, divided into three orders by large frames and surmounted by the curvilinear tympanum.
Intermediate spaces are distributed on a single hall with six side chapels. In the apse, above the wooden benches, a large canvas tells the story of St. James preaching in Judea. In addition to the rich paintings produced since the sixteenth century, noteworthy is the Renaissance baptismal font dating back to 1539 and placed in front of the altar of the first chapel on the left.

Along our walk-in Crema, we take via Giacomo Matteotti, overlooked by the oratory of San Giovanni Battista, built between 1583 and 1584. The simple and linear style of its Renaissance façade is composed of a large tympanum supported by Corinthian pilasters.

The entrance of the oratory of San Giovanni Battista is composed of a massive marble door surmounted by a large rectangular window that illuminates the interior. Entering the small oratory, there is a single nave closed by barrel vaults. What makes these spaces special are the seventeenth-century frescoes by Giacomo Barbelli, representing works of corporal mercy.

The oratory of San Giovanni Battista is finally completed by the bell tower closed by mullioned windows and a polygonal spire.

In fact, on its square, the building that housed the Austro-Hungarian market, characterized by a beautiful loggia, the church of San Domenico, which now houses a theater, the palace Benzoni – Donati and, in the center, the monument to the fallen of Cremona.

The eastern side of Piazza Trento e Trieste is instead occupied by the former church of San Domenico with its facade in Lombard Gothic style. In the second half of the 15th century, the building was erected based on a previous chapel of 1332 dedicated to San Pietro Martire and some houses.

Over the centuries, these spaces were modified and enlarged with the addition of a convent. At the end of the eighteenth and during the nineteenth century, after requisitioning the spaces, the French troops turned them into barracks, and the church was used as a cavalry. In this period, other structural changes were also made to make the best use of the spaces. The side walls were raised to obtain a larger space, and the total width was enlarged with structural works.

In 1899 the municipality of Crema took possession of the former church of San Domenico. It made further transformations to use the convent for different purposes, from a workroom to an elementary school, from a military hospital to a covered market. In 1943 the podestà of Crema gave the structure to a private individual, who turned it into a cinema theatre and transformed the building into a small house for the custodian. This caused bitter discussions about the use of the church, but after a period in which it was used as a gymnasium, it returned to being a space open to the public in the form of a theater.

In the nineties, huge works of restructuring and safety and recovery of works of art and frescoes inside were implemented. Since 1999, the seat of the theater of San Domenico shows off the particular decorations in brick, some of which date back to the church’s original structure. This theater is the main city theater in Crema.

The history of Palazzo Benzoni Donati dates back to the beginning of the 16th century, when Socino Benzoni, a descendant of the family that had governed Crema a century before, took over the property. Socino Benzoni was famous in Crema and the surrounding territories for his great military skills and as a mediator, so much so that it is thought to have been instrumental in saving the city from destruction by the French army, mediating directly with King Louis XII. In fact, the king was hosted by Socino Benzoni inside this building on the nights of 27 and 28 June 1509. The palace passed in property to Socino’s sons and then to his nephews. Paola Benzoni had three children among which, in 1579, Francesco Bernardino Visconti, who in Manzoni’s novel Promessi Sposi (The Betrothed) will be indicated as the Innominato. This character, who lived in the Duchy of Milan, sought refuge in his mother’s house many times, therefore right inside Benzoni Donati’s palace.

Here we are in the main square of Crema, Piazza del Duomo, where our tour of the historic center ends. This square is part of the oldest part of the city and dates back to the fifteenth century when it was created under Venetian rule.
Many historical buildings overlook it, such as the Torrazzo of Crema, the city cathedral, the town hall, the Praetorian Palace and its tower, and the bishop’s palace. The southernmost side of the square has a series of houses with porticoes between which there are small covered passages that testify to the ancient accesses to the fortified heart of the city of Crema.

How to Get to Crema

Arriving in Crema is very easy because the town is only an hour’s drive from both Milan and Bergamo and can be easily reached by train from all over Italy. As for the airports, the closest are Linate, Malpensa, and Orio al Serio, but also those of Brescia and Verona are well connected to the city by shuttle bus services. 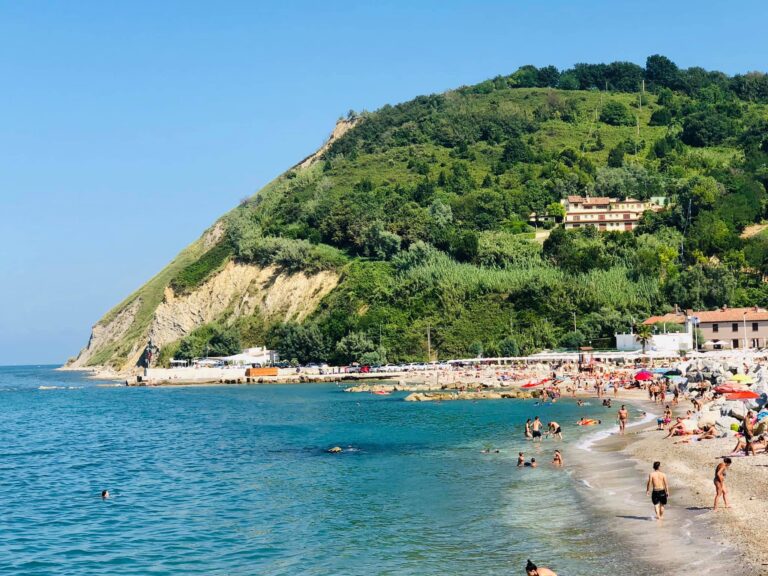